We want community-led economic development, the kind that’s just, ecologically regenerative, inclusive and equitable. But it’s easier said than done. Creating bottom-up economic change is incredibly difficult. But for the past three years, we’ve been doing something that seems to be working. It’s relatively cheap and easy to do. And now it seems like a good time for this innovation to start spreading. We call it the Local Entrepreneur Forum. 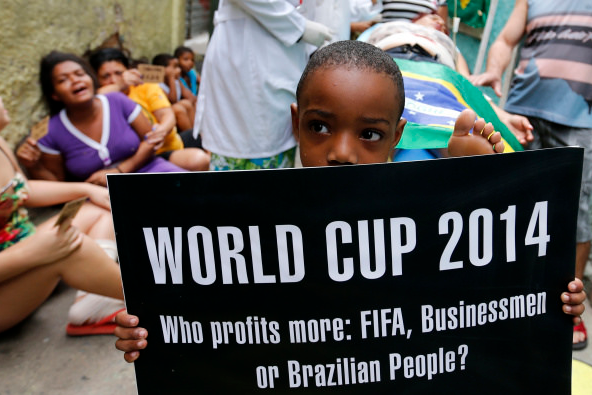 The recent World Cup was an amazing spectacle that held the attention of a billion people with the on-field drama of football, but it also serves as an instructive example of the dominant economic development model at work at every scale, from multi-national down to local authority level. At the core of this model is a shadow play of free market capitalism, characterised by corporate-government partnership, benefiting primarily the business and political interests of those firms who win the contracts and the functionaries who award them. Whatever the short-term bump to GDP, the preparations for this football tournament will do virtually nothing to improve the economic conditions and wellbeing of the common citizen for whose benefit it was ostensibly staged. In fact, thousands took to the streets, risking arrest and police violence, well before the first goal was scored and through to the final whistle of the final match, protesting the misplaced priorities and the corruption of the whole enterprise. But this is just the latest chapter of top-down, large-scale, corporate-led development whose trickle down benefits have never matched the hype, nor justified the massive investments, public debt, and corruption of democratic institutions.

The development model adopted by most local authorities is basically a smaller-scale version of the same game, but generally called by a benign sounding name, ‘inward investment’. As it implies, investment originates from outside the area and is led primarily by corporations or corporate-government partnership, or if not partnership, then collaboration. Imposing development from the outside-in primarily benefits those on the outside, whose economic interests are served by enlarging their market, gaining control over resources, or profiting from tax breaks and other largesse from local planners, who themselves benefit from the hassle-free, tick-all-the-boxes exercise. Local economic benefits, such as boosts in employment, are almost always short-lived, while profits and dividends are headed ‘outward’ until, sooner or later, they dry up and the corporate ‘partners’ leave for the next ‘inward investment’ opportunity. Meantime, duped or duplicitous elected officials expect the shiny new corporate signage on the motorway will lead to re-election, or at least economic advantage for their own real estate investments. Because the electorate is too often uninterested and disengaged from the practice of local governance, this model remains largely unchallenged. 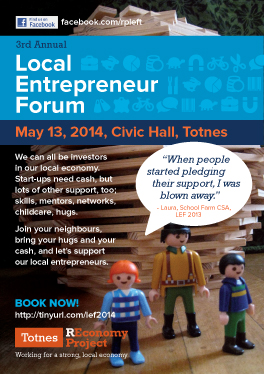 A better development model is community-led and aims at fulfilling the needs of local people and the wider eco-system rather than maximising share value for distant owners. This kind of approach is about providing meaningful livelihoods, increasing inclusion and participation, decreasing inequity and negative ecological impacts, increasing local ownership and production, decreasing dependence on outside corporates and imports, increasing wellbeing and resilience, and so on. It’s often called ‘economic relocalisation’, for short. And this is exactly the kind of development we’re hoping to achieve in Totnes with projects like the Local Entrepreneur Forum.

The Local Entrepreneur Forum is a one-day event that nominally brings together entrepreneurs and potential entrepreneurs, investors and potential investors, as well as experts and enablers of all kinds. Really, the event is a focal point for a broader strategy and set of activities, bringing together a wide array of people in the community in what may be more accurately called ‘community supported entrepreneurism’. It’s playing a leading role in creating the conditions for new economic actors to emerge, new business and investment models to be tested, and a new social and sustainable entrepreneurial culture to take root.

Like many good ideas, the Local Entrepreneur Forum was born of setbacks and perseverance. In late 2011, after hitting obstacle after obstacle in our quest to develop an incubator for social and sustainable start ups, we decided to simply create an incubator experience for one day in the Civic Hall, inviting everyone we knew who might play a role in developing or supporting new enterprises. We designed the format to promote learning and relationships. We have a few inspiring speakers, because every event has to have them. And we have a shared locally-sourced lunch, because that’s prime networking time. But the two biggest and most important parts of the day are a couple of hours of an ‘open space’ style activity we call ‘Be like a Bee’, and a pitching session where 4 or 5 vetted entrepreneurs pitch their business plans. 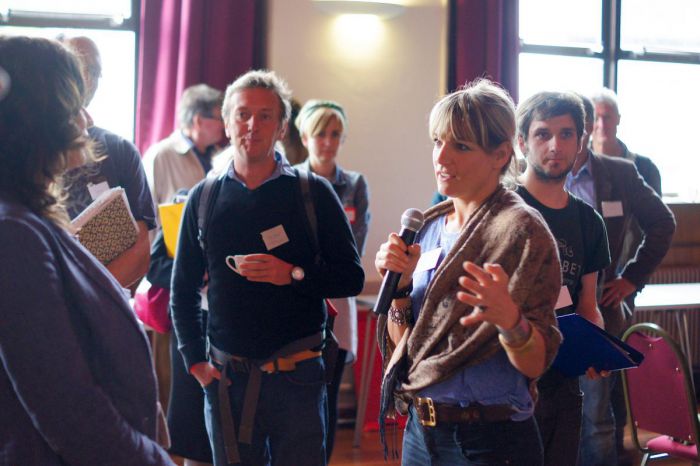 The Be like a Bee session begins with some facilitated ice breaking – ‘constellations’, for those of you in the know – so everyone gets to see who else is in the room. This is where relationships begin – a friendly face and a good excuse to start a conversation. Everyone gets to meet who they need to meet. Then we slide into an open space activity where topics are proposed and decided, and breakout sessions are organised around a dozen or so tables spread across the hall. Topics range from ‘how do you write a business plan’ to ‘who’s interested in eco-tourism?’ and everything in between. There’s enough expertise in the room to make sure that everyone gets a chance to learn what they need to learn.

The other big part of the day is the pitching. Our first year, the projects were pitched to 3 very friendly ‘green dragons’. They weren’t like TV’s hard-nosed ‘business as usual’ capitalists, but social enterprise leaders with access to resources, networks, and expertise. Their remit was to engage and support these fledgling projects in any way they could. And they did. But Pete Yeo, one of the dragons, also told a story about how a café in his town that needed help received an outpouring of gifts from their supporters in the community, including everything from a bit of cash to taking a shift washing dishes. This is about more than just money, he said. This provided the spark for an important innovation.

The idea that the entire community could be involved in the process of supporting entrepreneurial projects, with both financial and non-financial ‘investment’, felt exciting and necessary. Many of us had already been working with concepts like ‘fundamental human needs’ and ‘gift culture’, looking for opportunities to integrate them into strategic projects. Entrepreneurs have all kinds of needs that go far beyond the acquisition of funding. The event itself, as well as the activities and narratives that point to it throughout the year, can also meet many of the needs of members of the wider community, for identity, participation, and so on. This led us to modify the format of the day to have the entrepreneurs pitch their projects to the entire audience, the ‘community of dragons’. 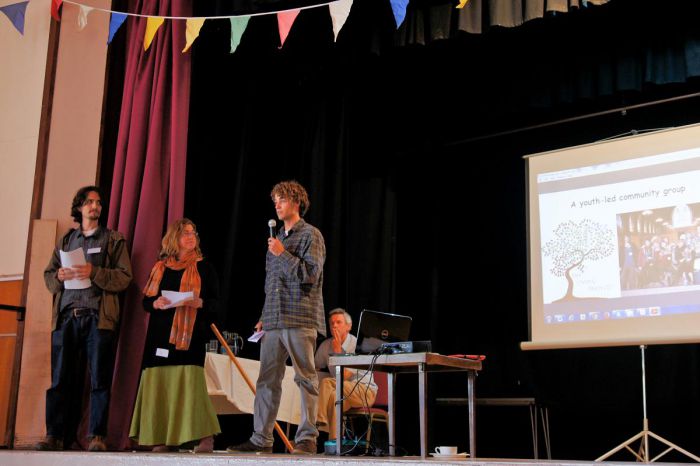 At the 2013 and 2014 events, a total of nine entrepreneurs pitched and the community responded with loans and gifts of close to £30,000, legal and marketing services, mentorship and access to networks, free labour and consulting, offers of storage space and accommodation, land for growing, dozens of fruit trees, tonnes of mulch, a horse paddock, massages and massage training, video and radio production, advertising and editorial coverage,lunches and dinners, and hugs, too. All the more thrilling because even though we coached the pitchers to ask for the things they needed, they got loads of gifts to ease their journey they could never have anticipated. This abundance of generosity sets the room aglow with a warmth of feeling that says this is a shared enterprise and that we’re all in it together.

The day provides a space for the concept of ‘investment’ to be cracked open and experienced. It provides an opportunity for the wealth of social capital that exists here to be put to work regenerating the local economy. This gives rise to a new shared narrative that includes everyone as protagonist. We all have a stake in our local economy and we can all ‘invest’ in the kinds of businesses, organisations, and projects we want to see flourishing. Entrepreneurs need all kinds of support. Money is important, but so is access to other tangible and intangible resources that new enterprises need to form, launch, and thrive. There are still more needs around what might be called ‘wellbeing’ services, what the entrepreneurs themselves may need – childcare, home-cooked meals, massages, hugs. Everyone’s gifts are valued. Everyone can be part of co-creating a new social and economic reality.

Now, the Local Entrepreneur Forum has become much more than a one-day event. It’s playing a prominent role in the work of the Totnes REconomy Project. We organise a range of networking events and talks throughout the year that support the Local Entrepreneur Forum directly or indirectly. There is a synergistic relationship developing between the event and other projects, such as the REconomy Centre, a small incubator we’ve been running for the past year, and Food Link, a network of local food producers and retailers. In practical terms, this is spreading the connectivity of a network, a network of networks, that will attract next year’s entrepreneurs, projects, and supporters. It’s also creating opportunities to make prominent the full range of concepts and models at the leading edge of this wider ‘new economy’ movement – financial and non-financial investment, patient capital and crowd funding, the local multiplier effect, cooperatives and collectives, circular and symbiotic industrial relationships, alternative means of exchange, new pathways for satisfying needs. 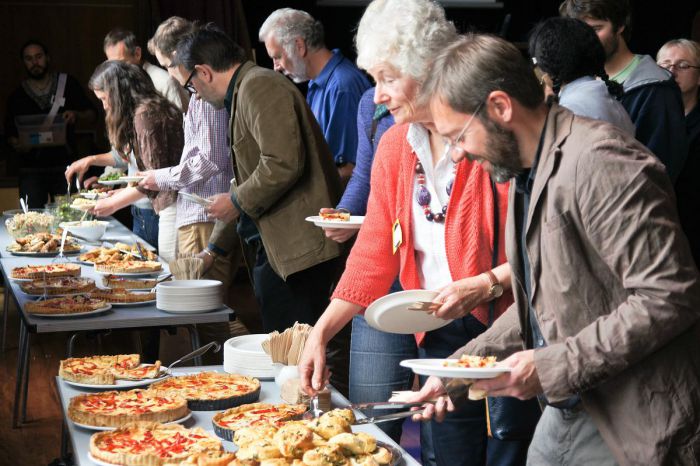 Less tangible but subtly detectable, the local culture is changing. Or perhaps it’s better to say a new culture is emerging, one that is growing in confidence, creativity, and collaboration. It’s bringing more people into the game, including young people and ‘not the usual suspects’. The students and faculty of Schumacher College are playing increasingly important parts in this story. Other organisations are looking to play their parts now, too, perhaps even the district council. These connections and relations, the growing sense of self-empowerment and collective self reliance – all this in contributing to greater resilience.

What’s next? We’re planning to run the next Local Entrepreneur Forum in the spring of 2015, of course, and hope that we can build on the positive results we’ve seen, so far. We’re also interested in seeing this model adopted by other community groups. Are you interested in transforming your local economy in one day? We’re ready to offer our support. Give us your pitch.